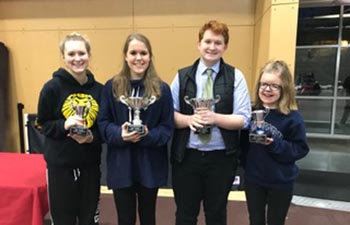 The EC Speech and Debate team heads to Nationals for the third consecutive year! In December, Liam Edwards and Emmie Gilchrist secured a spot at Nationals after taking first place for Duo Interpretive at Seattle Academy. With first place at the Gig Harbor tournament already secured, these two wins gave them an automatic entry to the National Invitational Tournament of Champions (NIETOC), which will be held in May 2018 in Denver, Colorado. Lindsey Jones placed fourth in Dramatic Interpretation and Catherine Vaugh placed fourth in Expository Speaking. With the team placing in the finals at every tournament they’ve entered this season, they have also secured the opportunity to represent EC at State. Go Cru!