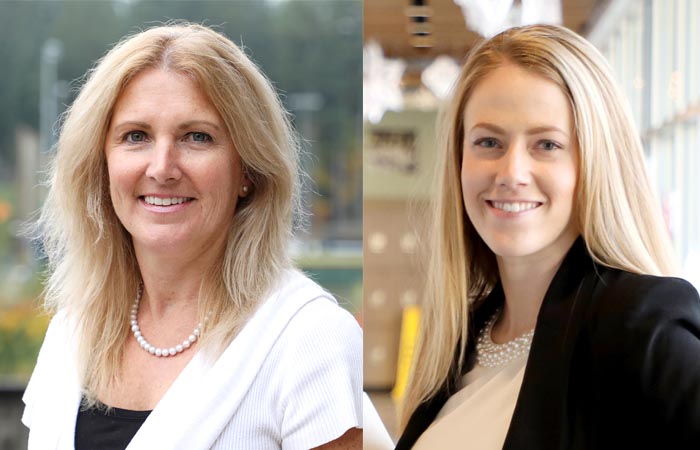 Eastside Catholic School is pleased to announce the permanent appointment of High School Principal Barbara Swann and Middle School Principal Ashley Hylton. Mrs. Swann and Mrs. Hylton have been successfully serving as interim principals since the start of the 2017-18 school year.

“I’ve had the pleasure of working with these two outstanding educators since the beginning of the school year and they have proven themselves to be highly successful and motivated administrators who will serve EC well in the months and years to come,” said Interim President Tom Lord. “Eastside Catholic is fortunate that they have accepted these positions and will benefit from their strong leadership.”

Prior to Eastside Catholic, Barbara Swann was the international program director and dean of students at Kennedy Catholic High School from 2008-14. Mrs. Swann is a two-time Fulbright program recipient and taught in Austria and Egypt as a result. Her experience also includes work as a positive behavior specialist at Sammamish High School and teaching English, German, ELL and GRE prep at Kennedy Catholic High School, the University of Washington, Bellevue College and the Bellevue and Lake Washington School Districts. She holds a principal certificate and a master’s degree in education administration from Seattle University. She earned her bachelor’s degree in English from the University of California, Berkeley.

“I am extremely excited to be a part of the fabulous Eastside Catholic School,” Barbara Swann said. “As an advocate for student voice, I encourage students to strive for the pinnacle in their education, seek the pathways of their future and serve the needs of their community, all encompassed in the Touchstones of Eastside Catholic – Academic Excellence, Relationships and Servant Leadership. I look forward to working with our students, faculty, staff, families and the community on our Strategic Plan, providing our students with a well-rounded, top-notch education and focusing on a growth-mindset in academic, spiritual, physical and emotional development. I thank God for the gift of allowing me to be a part of the Eastside Catholic family.”

Ashley Hylton joined Eastside Catholic in 2012 as a Middle School Religion Teacher. In 2016, she transitioned to an administrative role and was named Dean of the Middle School. Ashley received her principal certification through Seattle Pacific University and completed her master’s degree in education from the University of Portland through the PACE program while teaching in Ogden, Utah. She earned her undergraduate degree in history from Gonzaga University.

“I am honored to continue to serve Eastside Catholic in this leadership role,” Ashley Hylton said. “The support I have received over my last six years at EC has meant so much to me and I look forward to continuing to support our students, faculty, staff, parents and community as principal.”