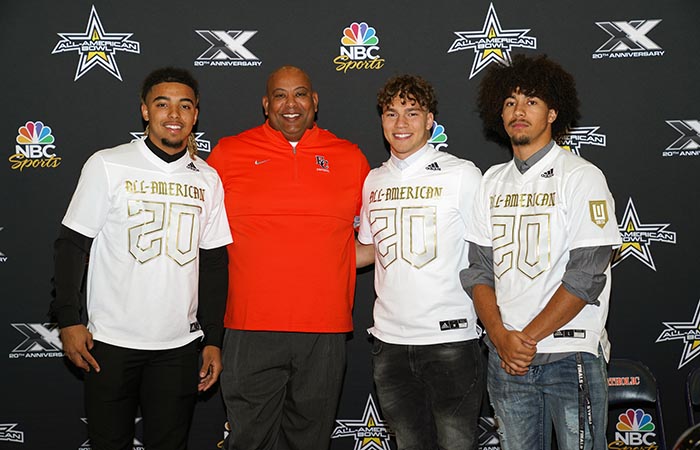 Three of our senior student-athletes, Sam Adams II, Ayden Hector and Gee Scott Jr., were honored as 2020 All-Americans when the All-American Bowl's Road to the Dome tour visited Eastside Catholic on November 21.

These three student-athletes have been selected to play in the annual East vs. West matchup in the All-American Bowl on Saturday, January 4 in the Alamodome in San Antonio, Texas. The game will be nationally televised on NBC. The broadcast begins at 10 a.m. with a noon kickoff and features the nation’s top 100 best high school senior football players.

Ayden Hector was featured in the Bellevue Reporter for his accomplishment.

247Sports highlighted Sam, Ayden and Gee in separate articles about them earning their All-American jerseys.

About the All-American Bowl
As an NBC Sports-owned property, the All-American Bowl is part of a marquee lineup of elite events that includes the Olympics, the NHL, the Premier League and the number one primetime show since 2011: Sunday Night Football. The All-American Bowl is annually the most-watched, most-talked about and most-prestigious high school all-star event with more than 4,500,000 television viewers and over 25,000 in attendance. The history and tradition of the All-American Bowl is unparalleled: 410 draft picks; 57 Super Bowl champions; 144 Pro Bowl selections; 16 Heisman finalists including, but not limited to: Odell Beckham Jr., Andrew Luck, Tim Tebow, Adrian Peterson, Joe Thomas and Trevor Lawrence.