Take a visual tour of our stunning campus

After you scroll through this visual tour of our stunning campus, we look forward to sharing it with you in person. To schedule a personal tour, contact Director of Admissions James Ward at jward@eastsidecatholic.org or 425-295-3017.

The King County Green Schools Initiative helps schools and school districts engage their students and employees in learning about and practicing resource conservation.

The EC Green Team, spearheaded by Class of 2018 students, prepared for Level Two Certification by reducing the school’s overall waste stream of trash, recycling and compost and directed a “Ban the Bottle” campaign to encourage students to use refillable water bottles. The team also conducted a carpool campaign to reduce the number of cars on campus, which resulted in more carpools than individual drivers. Lastly, an anti-idling campaign was launched to reduce air pollution around campus. 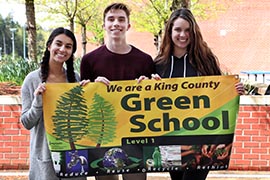 EC was awarded King County Level Two Green School in 2018 thanks to the work of our our students.