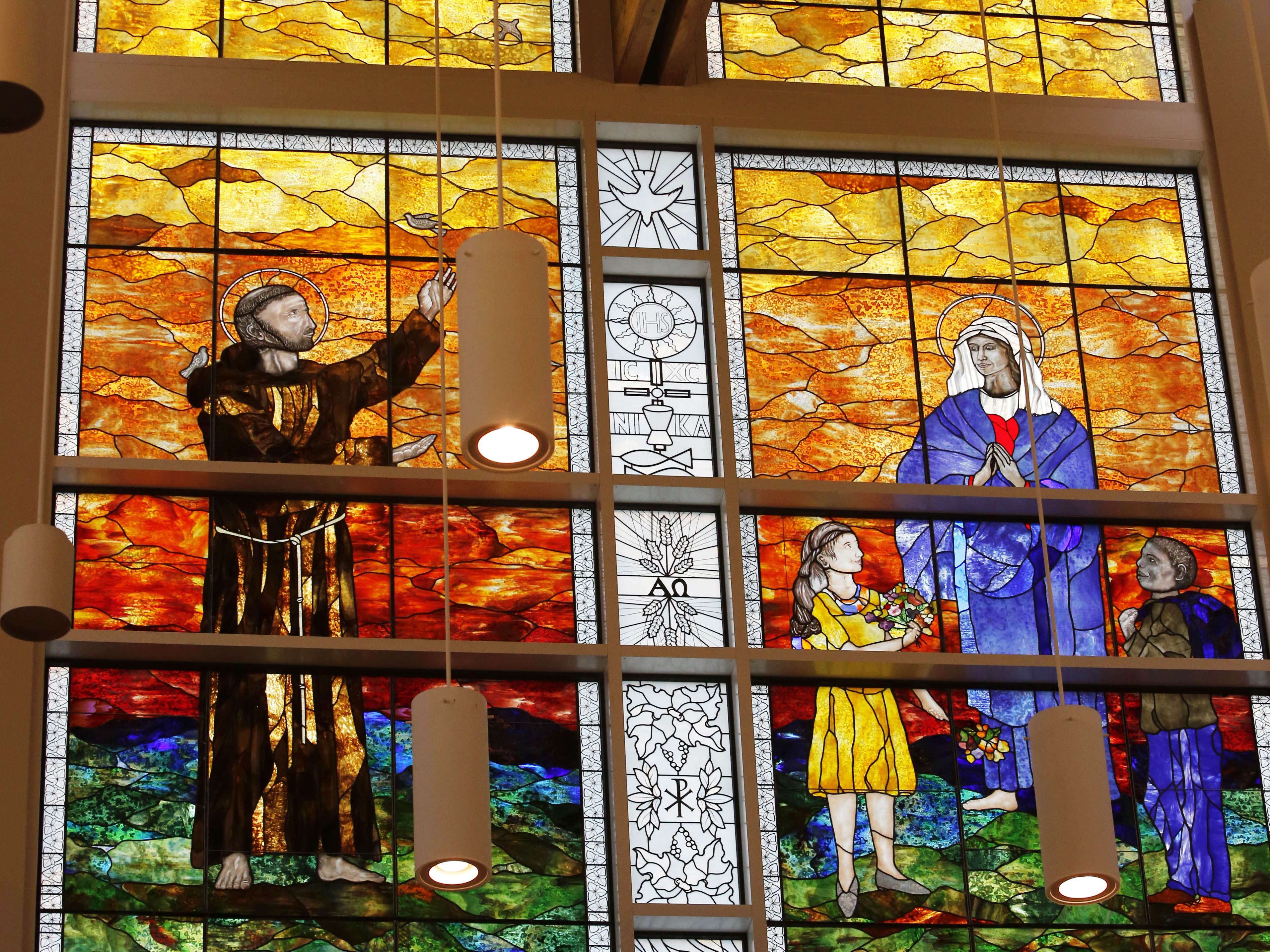 September 17, 2014
Share to FacebookShare to TwitterShare to Google+Share to LinkedInShare to PinterestShare to EmailPrint this page

Bathed in Color and Light

The Stained Glass Windows of the Chapel of St. Francis of Assisi

When design plans for the permanent home of Eastside Catholic began, the very first consideration was a chapel situated at the heart of our campus, a sacred space for reflection, prayer and the celebration of the sacraments, in particular the Eucharist. It was critical to open the school with a completed chapel, and thanks to our generous donors and dedicated volunteers and staff, on August 28, 2008 the Chapel was solemnly blessed by Archbishop Alexander Brunett. At that time, a decision was made to hold on the inclusion of sacred art in the Chapel until it was financially feasible.

Because the Liturgy is central to our encounter with God, the art and environment in which we worship needed to reflect the dignity and power of the Sacrament. We were very pleased when we added an element to The Chapel of St. Francis of Assisi which dramatically enhanced its purpose as the gathering space of worship at Eastside Catholic.

Sacred art is meant to both enhance a space and to inspire and educate those who gather within the space.

A generous donor made it possible for us to commission the creation and installation of beautiful stained glass for all of the windows in the chapel. A talented local artist, Edward Arnot, developed several original designs for our chapel windows. The glass was installed in two phases, the first was the windows surrounding the doors at the chapel entrance. Above the doors reads "The Chapel of St. Francis of Assisi" in stained glass, and includes quotes from our patron saint and from the scriptures. The stained glass in this phase also included the windows in the third-floor lounge looking into the chapel.

Phase two was the installation of windows above the crucifix in the main body of the chapel. Within this design is an original image of St. Francis, alongside an image of the Blessed Virgin Mary. The images of a teenage boy and girl are near Mary to represent the students at EC. When the sun is shining, the windows bathe the chapel with beautiful colors. At night they are backlit to be visible during evening gatherings.

I wanted to let St. Francis' love of God and nature soar in the Chapel's vast space.

Stained glass artist Arnot explained some of the symbolism captured in the images. "I wanted to let St. Francis' love of God and nature soar in the Chapel's vast space. The windows at the back of the sanctuary are meant to give the impression of continuous movement and the twelve birds represent the twelve Apostles. There was a strong desire to have earth tones in the space and I believed that the use of a sunset would be a great contrast with the white of the birds and quotes as well as the wood tones used throughout the Chapel. The school chaplain and head of school identified the quotes by St. Francis and scripture, as well as "Walk the Talk" which we thought would be timely and more relevant to the student body."

Sacred art is meant to both enhance a space and to inspire and educate those who gather within the space. Thanks to this project, our students and community had the opportunity to learn about the artistry involved and the spiritual significance of the windows. We were extremely grateful for the opportunity to beautify and enrich our great school and introduce a permanent, unique educational tool for our students and future generations of Crusaders.